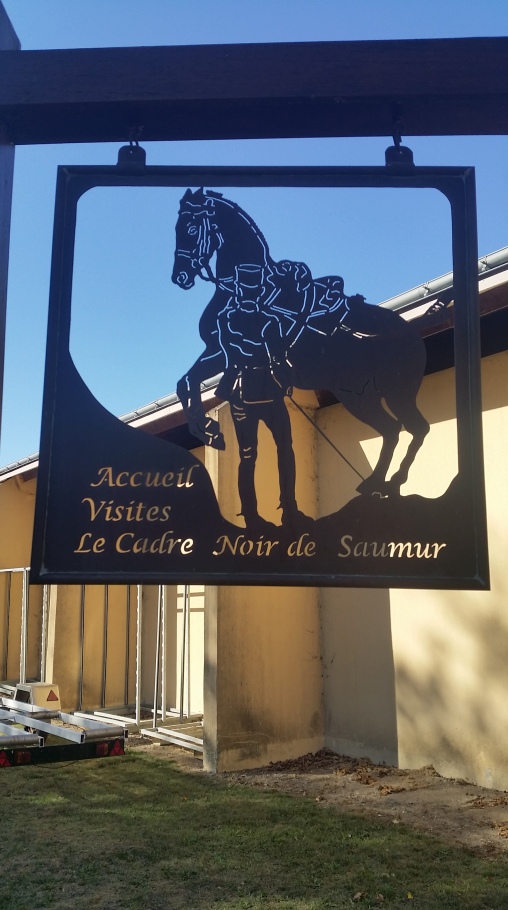 After a very quiet night parked in a grass parking lot beside a village Tennis Club, it was a quick trip around to the entrance of le Cadre noir.

This is an unexpected find for us and we have decided we are too close not to take the opportunity for a visit. 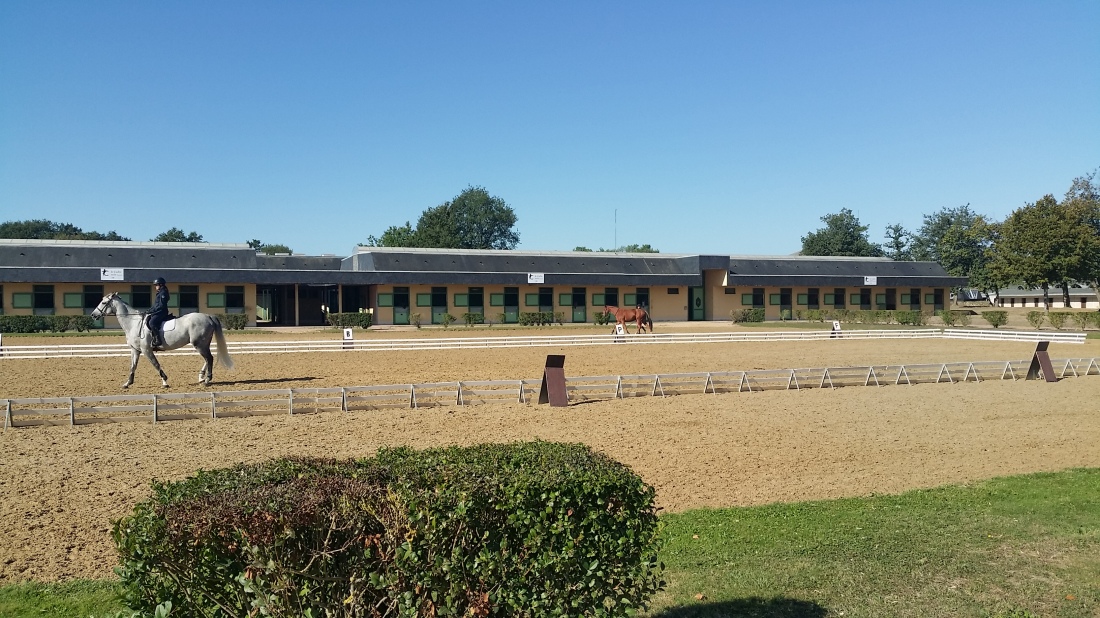 In 1815, King Louis XVIII decided to reorganize the French Cavalry (which had been decimated by the Naploeonic Wars) and created the mounted troops school inn downtown Saumur. With the necessity of forming quickly new riding soldiers for the army, around ten of the famous and better French civilian instructors formed the above group with the aim of teaching an academia horse riding style to soldiers. Over the years, soldiers have earned the level of their civilian instructors and replaced them. It was only from 1825 that the name “Cadre Noir” appeared.

The “Cadre Noir” is the teaching staff of the school. These instructors can be identified by their daily uniform of Black boots, jacket and breeches along with the Black “kepi” hat. 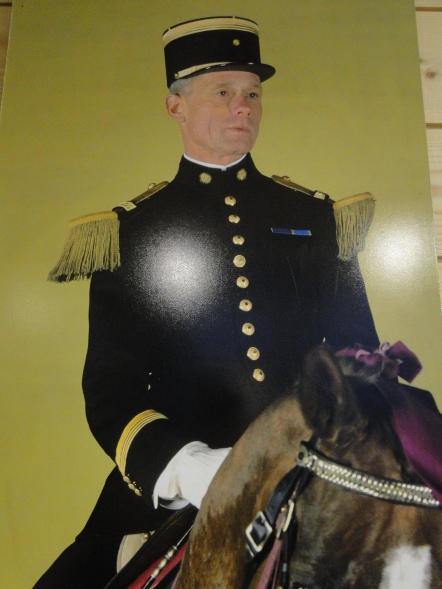 After WWII, obviously replaced horses to fight, so the Cadre Noir left the military school. From 1972 on it was demilitarized and became the teaching staff of the National Riding School, orientated for sport and competative equestrian.

As a tradition the chief “ecuyer” (instructor) is still a military officer. Today the “Cadre Noir” is composed of around 40 Ecuyer’s of whom 8 are military officers and 3 are women.

About 150 students come to the school each year, to train and perhaps go on to riding instrucor or even “ecuyer” eventually. Competitions are part of the school as well as “Pole France”, where the French Equestrian teams train before the international competitions including the 2016 Olympic winning Eventing Team, (pride of place on the trophy wall).

Other aims of the National School are to study and research, equestrian performance, including France’s most prestigious equestrian veterinary resource’s. 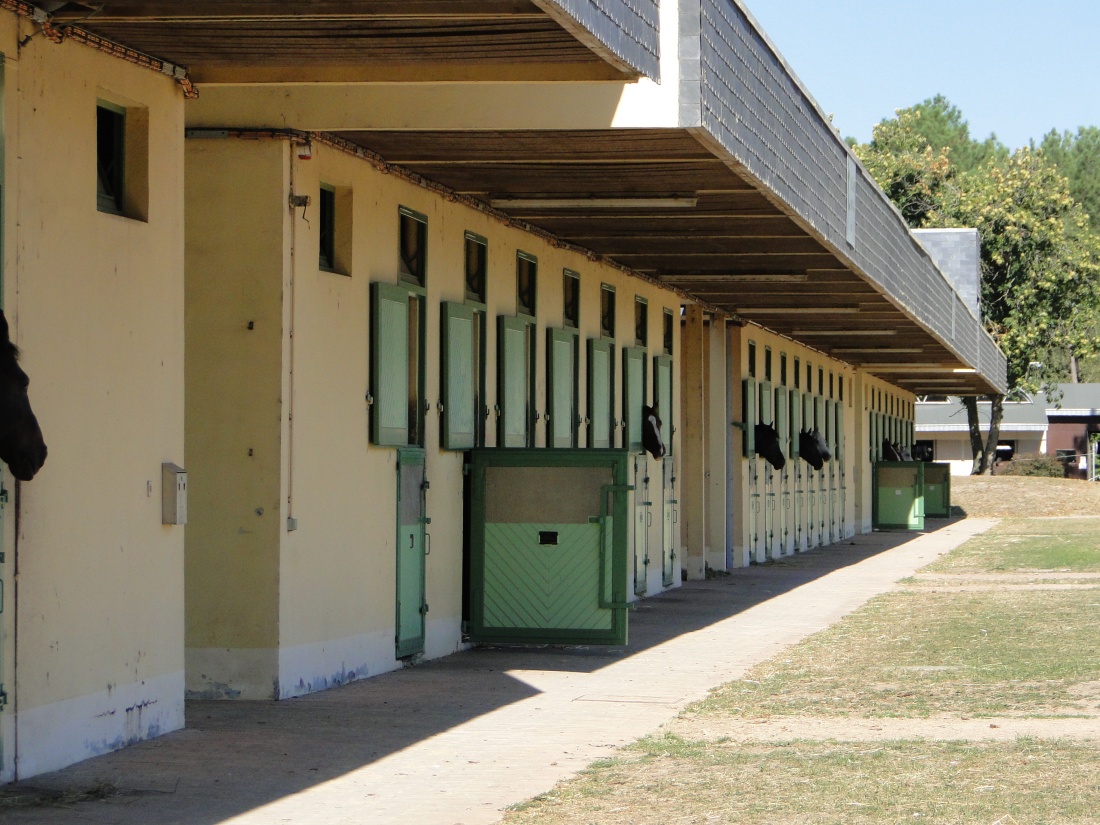 Another part of this School is the continued tradition of the exhibitions and gala’s which effectively revolve around traditional dressage, both individual and “la reprise de manege”, along with the “Airs above the ground performances”. 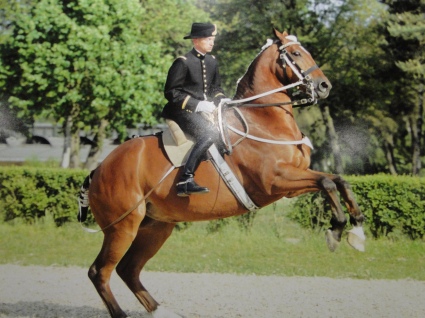 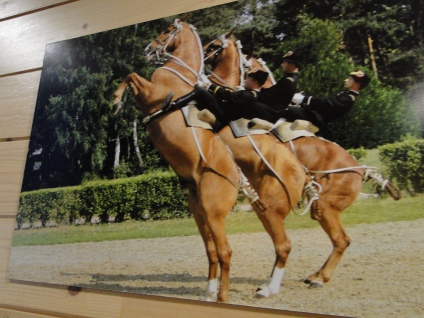 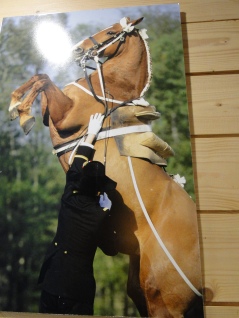 The school currently stretchs out on 300 hectares. The school boasts 7 indoor riding arena’s, 18 outdoor arena’s and over 50km of tracks as well as a big cross country. 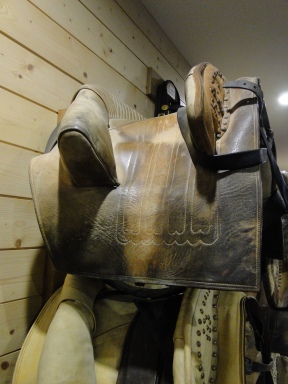 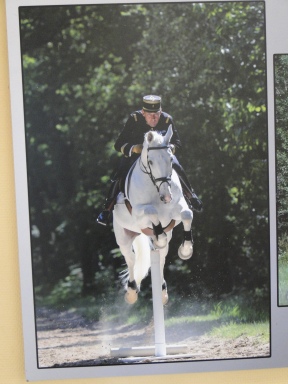 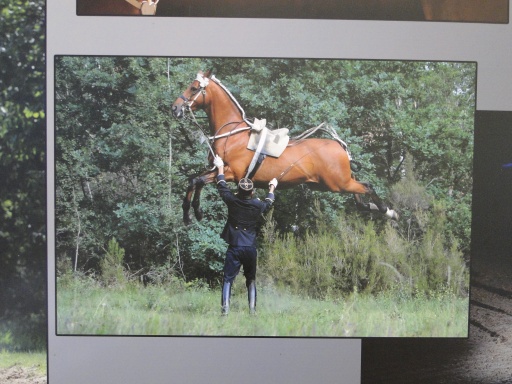 The school accommodates 400 horses, 300 of these are owned by the school. All horses are bought as three year olds, (no breeding done by the school). The school buys mostly geldings (60%) and no stallions are kept at the school. The horses career at the school lasts about 15 years and once the horses have reached this age they are sold to riders or to welcoming families.

The stables are all automated, with auto feeding 4 times per day unlimited hay it seems. Manure and stable waste is removed thanks to an automatic system, Grooms muck out the boxes, into the corridor between the boxes where there is a conveyor system to remove it all to dumps. Each year about 6000 tonnes of manure is sold to local mushroom producers.

We were very fortunate enough at the end of of tour to be able to watch about 5 minutes of the dressage practice in the huge performance arena as they were rehearsing for the Gala performance the following weekend. Would have loved to have hung around to have been able to see that however there is a ferry booking for us Monday Morning. 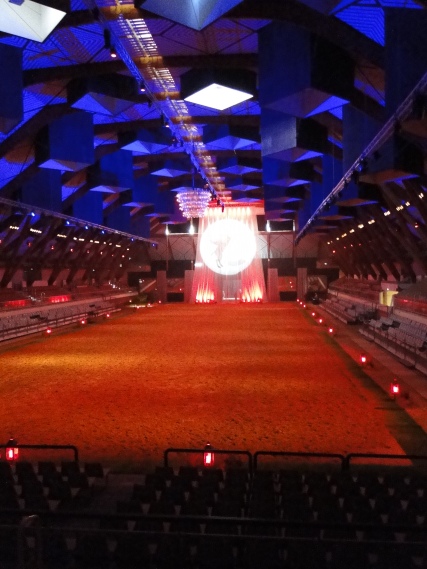