From Champagne To Burgandy

France seems very hard to leave behind, we really had thought we would be in Switzerland by now, unfortunately small things such as food and wine keep getting in our way, plus the neat little towns and villages that host the before mentioned food and wine.

So an overcast morning at Lake d Orient changed our plans from a bike around the lake to lets get on the road again. Following the D977 we soon found ourselves in the City of Dijon. 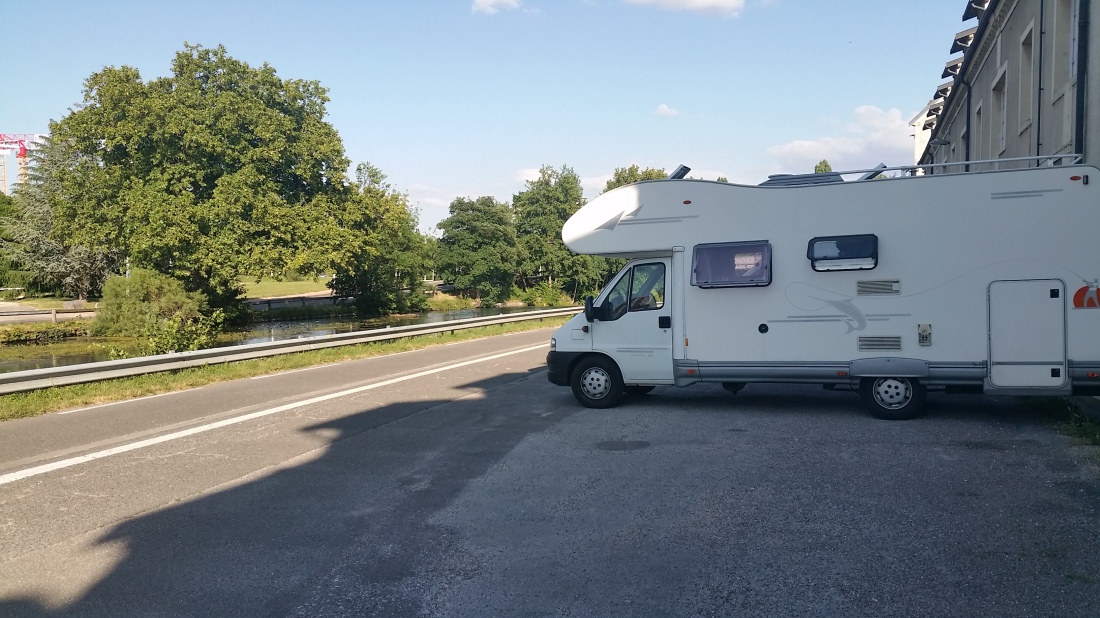 And of course, THE MUSTARD.

The way to see this city is the Owl walking tour, self guided with great written description a fantastic way to spend a few hours. Highlights are the Palais des Ducs and the 14th century Tour de Bar (tower), we did the climb to the top of the tower the following morning.

A couple of obligatory stops and tastings at mustard outlets ( guess what some people are getting as gifts), PLEASE NOTE, Wasabi Mustard is not an easy combination to get past the taste buds and has a considerable lingering effect.

We knew that the night could be different as France was playing Belgium in the Semi final of the World Cup, and sure enough come 10.00pm, the fireworks started, and as everybody driving home carhorns used continuously. Very happy Frenchmen and women. Don’t plan to be in France for thr Final though.  Big week here, Tour de France, Bastille Day and World Cup Final all one weekend.

Curiosity is getting the better of us now, with all the wine everywhere, we still cant make out what is what, not only language differences on the labels but no real variety descriptions either.

Seeing as we are in Burgandy we had better fix this misunderstanding and lack of knowledge. Remember this trip is all about learning.

A bit of research and the town of Beaune is called upon for this learning experience and an easy drive here through miles of little dwarf looking vineyards interspersed with arable crops. 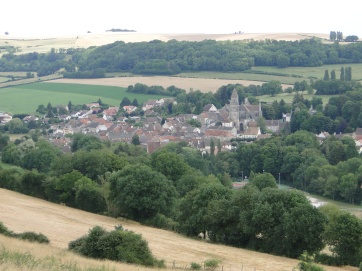 Another very amusing road episode in a small village.

As you may have seen by some videos we have posted these main streets are reasonably narrow at the best of times, mix this with road works and this poses a whole new aspect of confusion.

So sit back and picture this if you can, it is a classic of in hindsite  I wish we had a dashcam and I also wish I had taken some photos.

Our side of the main village street, is dug up against the houses to put in new sidewalk and guttering etc, traffic lights are on red so stop, (first in line, this is another oddity that is occurring to us A LOT), when lights change they go to a flickering Orange (don’t do Green here), vehicles coming other way have stopped so of we go, there are temporary marker posts in place reducing to one lane (think roadcones in NZ). Around the first corner and SHIT, there’s a Friggen combine harvester still coming through with a tractor following.

OK this will be tight, the guy guiding the combine (flashy lights on top of little guide vehicle didn’t seem to see the funny side of this as much as we did), but work on principle of we are all committed now so we need to fit a bus through this.

We did and without losing a mirror, however by now the traffic lights are completely up the wop and vehicles blocked up from both ends coming through a one way street.

I should also make the point that this is at lunchtime, a magical time of the day in France between 12.00 and 2.00pm when humanity ceases to exist in any form of work related activity. So we are by ourselves.

Facing an oncoming stream of cars and trucks, a little smaller than a combine but not by much, Susie engages work mode and runs in front of Miss Stella moving the roadmarkers and big plastic barriers out of the way for us. Many smiles and waves from oncoming truckies.

No worries, oh how things change 9 weeks ago we would have had kittens and a meltdown over this situation. 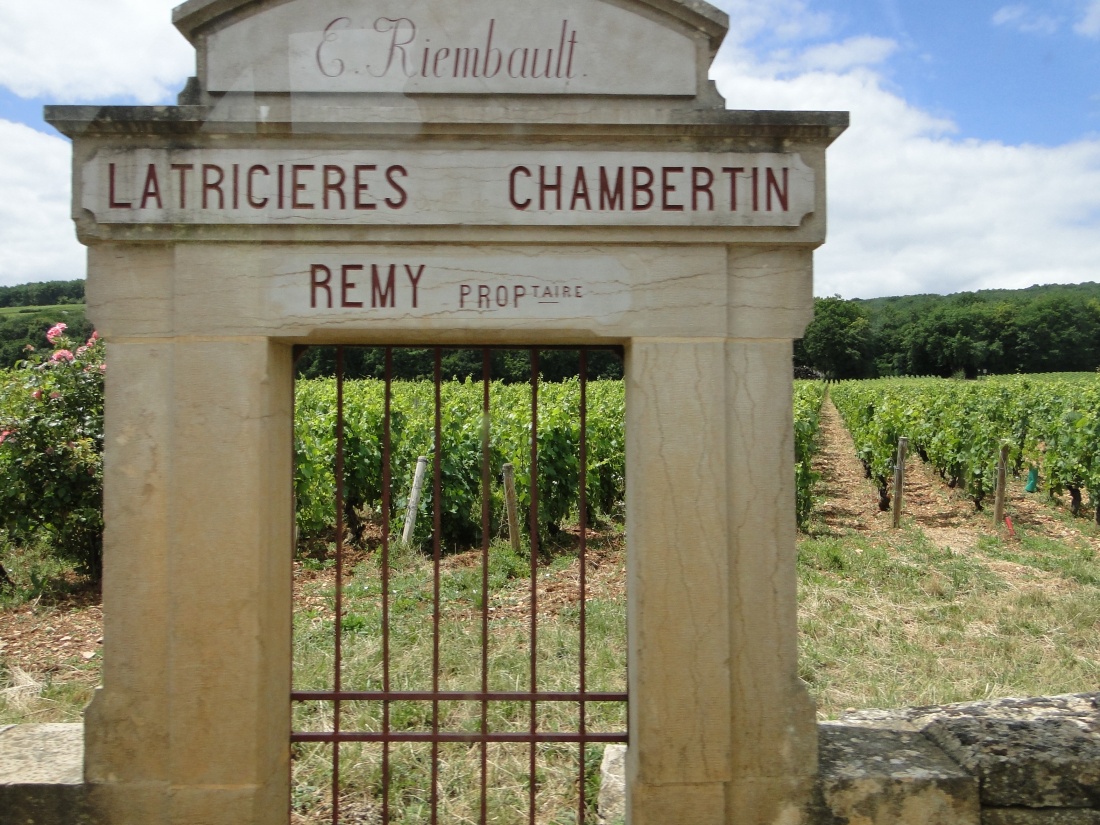 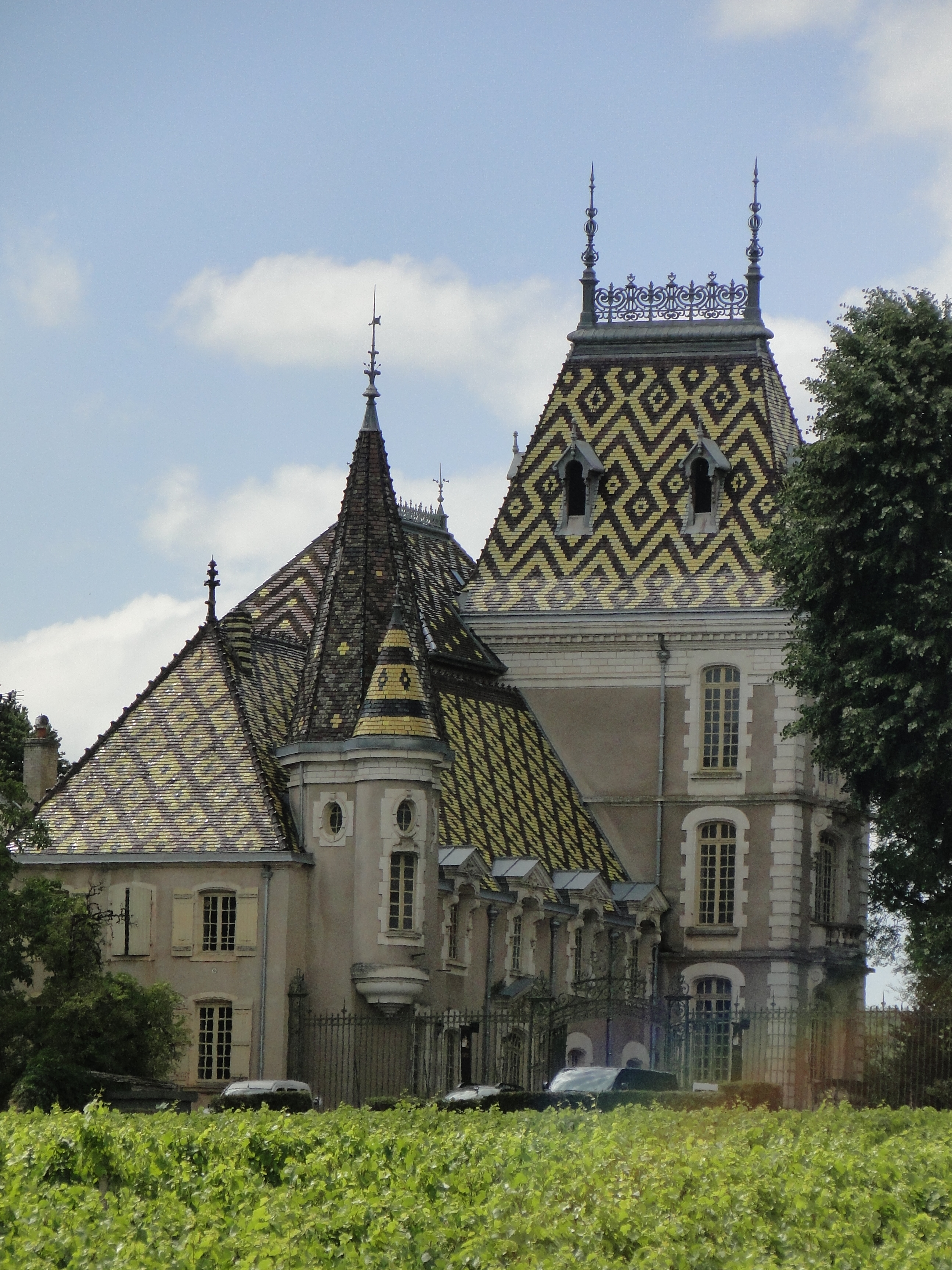 The trip through to Beaune continues without further incident and we find our Park4night site very easily. GPS 47.0177  4.8367. Written up in 2012 as 6 free parking spots with paid services, it seems to have grown and overtaken the rest of the carpark. 40 Motorhomes parked here first thing in the morning, continue to be amazed at the lack Of GB plates, mostly German and French with a few Italians thrown in for good measure.

Kick back and have a lazy evening, with exploration due tomorrow.

Beaune (pronounced “Bone”) is the unofficial capital of the Cote d Or and this town is all about wine. A town enclosed with stone ramparts (another way to say it’s a walled city again) it must just about be completely hollow underneath due to the number of cellars advertised.

One of the highlights of Beaune is undoubtedly “des Hospices de Beaune” and its amazing multicolored tiled roof. Built as a hospital for the poor in 1443, it remained a working hospital until 1976 when the new one was built. No recreated as a tourist exhibition of the advancements in medicine complete with amazing artwork and tapestries. 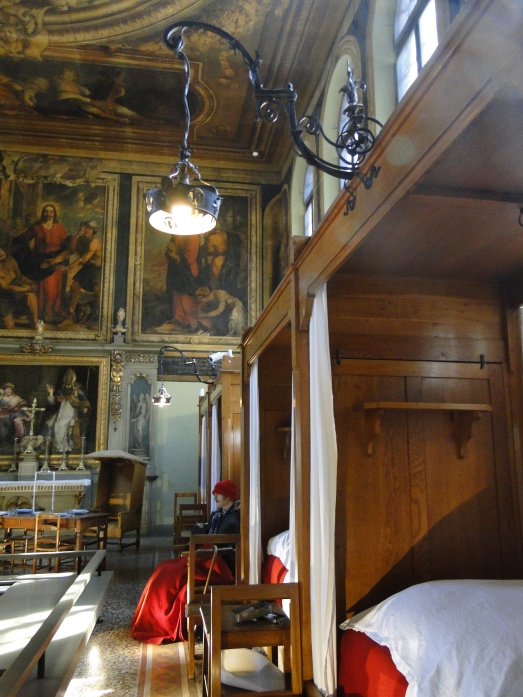 Very few of the actual vinyards have outlets here they are all on the estates themselves scattered through the “tiny” villages on this route,(Routes des Grand Crus) ( read = even narrower main streets), most of these guys are essentially wine merchants.

This was a opportunity to learn something so we did a cellar tour and degustation with one of these merchants. Lots of Learnings and I must say he wasn’t that impressed with the New Zealand way of wine making, or the Californian or the South American, may have been the typical Frenchman I think. They don’t like change.

Anyway we tasted 2 whites and 3 reds, I think these were the ones he was trying to flog off as he didn’t really try and sell anything else. 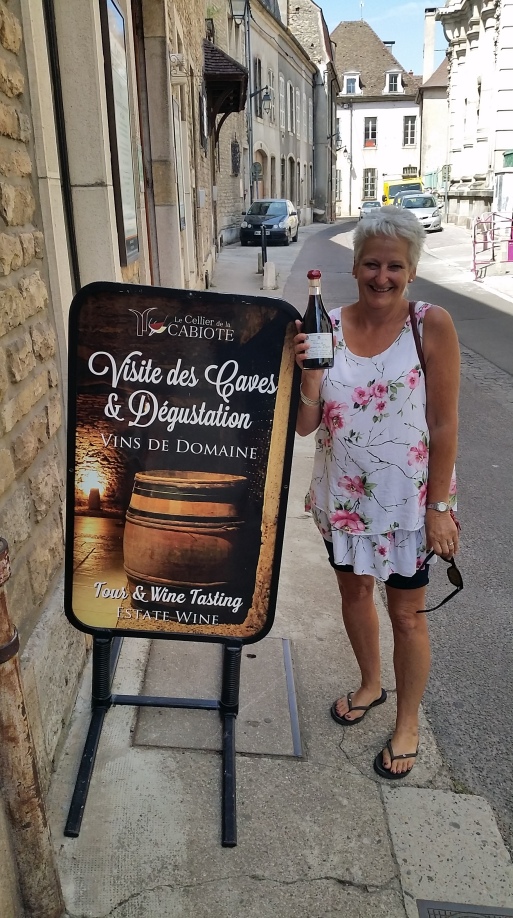 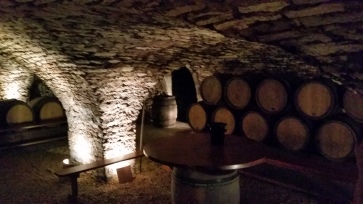 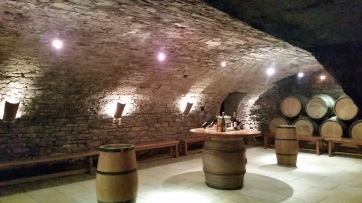 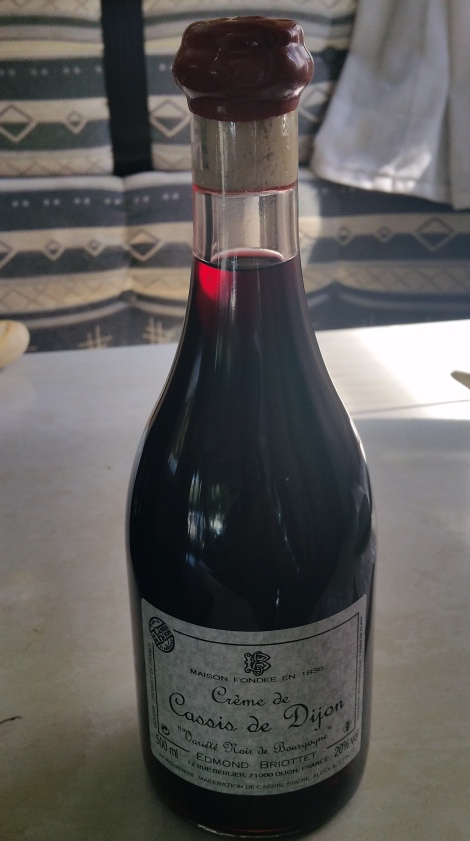 A great experience though however doesn’t make the purchasing decisions any easier, might have to stick to Susie’s tried and tested method of looking for weird shaped bottles under 5euro. 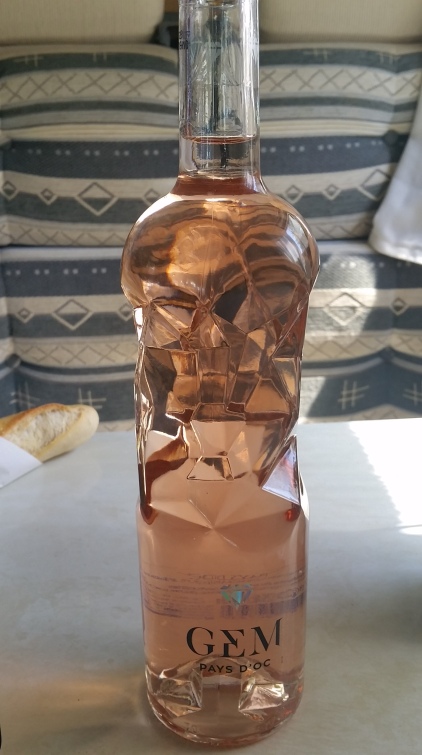 A late afternoon finish here gives us time to hit the road for the evening, with Macon on the radar. Travelling well we push on and eventually end up in Bourg en Basse, with the Alps looming ahead of us.

When we arrived about 8.00pm there were about 6 other campers here, however at about 9.45pm cars and cars and cars started to rock up and people heading to the Monastery that we are parked behind.

Curiosity got the better of us, and like sheep we followed on. Well some things are just pure fluke and we were able to witness the most amazing   computer generated light show I have ever seen. Lasting just over 15minutes and projected onto the front façade of the Cathedral it was truly spectacular. We have posted a video on our pages of Facebook.

By the third  time through we were able to move to watch it dead centre and so worth the effort of being curious Kiwis. Really a case of right place at the right time.

So Switzerland beckons, finish this and a grocery shop, stock up as much as we can due to cost ahead of us, find some more wine, change some money over, and our next adventure begins.

See you from Geneva.