Talking to neighbours in campsite they informed us they turned away from the castles due to the crowds and the fact that this overnight site has 150 pitches and they are all taken we take note and decide we need to be on our bikes a bit earlier than normal today.

A relaxed bike ride of about 5km saw us reach the carpark/ticket area for the Royal castles of Neuschwanstein and Hohenschwangau and this is our first experience of crowds for a couple of weeks. Standing in line for a good 15minutes to get tickets. We decided only to do Neuschwanstein as this is the first truly Fairy Tale type castle so far and the history behind its building is so different.

A 20 minute uphill walk certainly was a good cardio workout and looking at a lot of the other punters coming and going this must be quite a regular callout area code for the local ambo’s. Another interesting fact that seems to have developed when walking with Susie, people obviously don’t see her as a threat and therefore oncoming traffic never seems to move out of her way. Those who know can probably envisage her reaction to this and this was no exception today, there ended up being quite a bit of “chicken” being played. Some dumbasses just don’t seem to get the simple fact of walking rules should be the same as road rules here “STAY ON RIGHT SIDE OF THE ROAD” its not F&*^%$g Rocket Science.

So along with the several hundred others we duly reached the castle, and far out, the goddam scaffolding curse has reached its ugly tentacles into Germany as well.

Access into this castle is by tour guide only so we waited our turn for the 11.05 English speaking group, and where shepherded through this rather grand ostentatious castle.

This castle was the intellectual creation of the mad King Lugwig ll of Bavaria, also known as the fairy tale king who came to the throne in 1864 at the age of 18. He happened to have a bit of a hang up with German sagas and legends to which the musical dramas of Richard Wagner had introduced him. He withdrew further into this dreamworld of dragons castles and Knights of the Realm and as such built this magnificent castle and had designs drawn for 2 more.

This building of this castle wasn’t begun until 1869 therefore has electrical workings, running water and all the other 19th century wonders. Unfortunately he died about a third of the way into construction so it stopped there. All of his living areas, main formal rooms and throne room were completed however and are essentially the tour. The interior of this area is an incredible montage of mural’s depicting all manor of religious and fable type scenes. Photos were not allowed in here so the following are paged from the guide book. 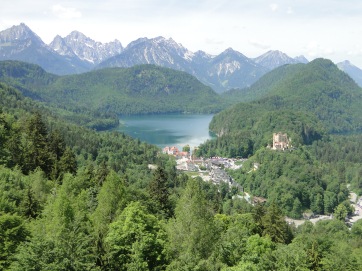 Once the descent to the carpark had been made without too much “walk rage” made our way to the base of the Mountain Tegelberg and took the Cable Car to near the summit at 1720mtrs, here all the local nutters through themselves off the mountain  on paragliders or attach themselves to someone who they believe has the skill to get them to the bottom safely underneath a bit of fabric and a bit of baling twine. Others come up here (come even walk up) to climb some pretty impressive rockfaces, in the winter it looks to be some pretty good slopes for skiing. 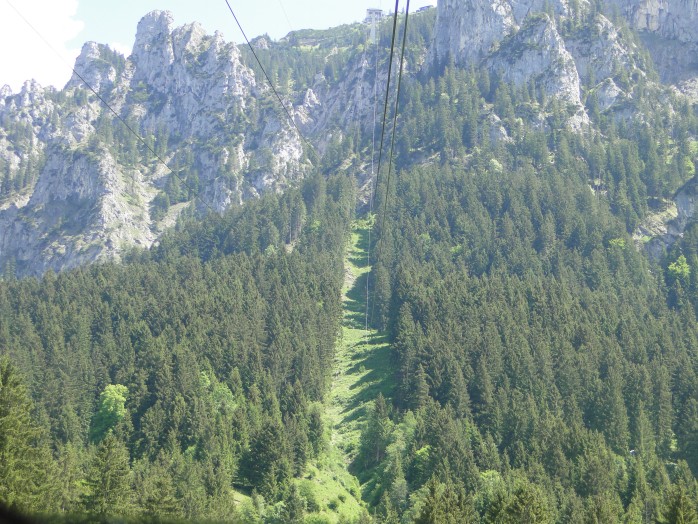 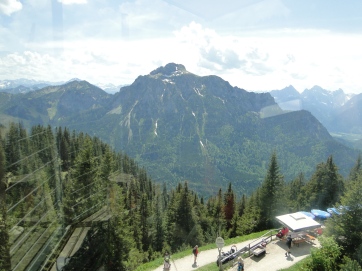 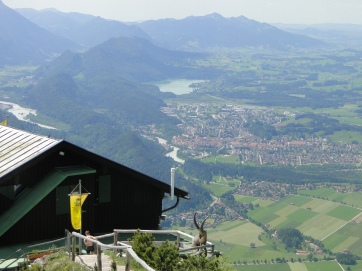 We went up for lunch and a beer.